A Journey In Grace

Kuldeep Bartia is an international student from northern India. She and her family are Sikhs, a community with strong values and beliefs of unity, justice, freedom of religion, and community service. Kuldeep’s journey in Canada not only led her to Jesus, but through many bumpy roads, she came to know Him as her protector and comforter. She is impacting her family’s perspective on Christ.

Since childhood, Kuldeep had a passion for aviation because her dad serves in the air force. Kuldeep studied aerospace engineering and obtained her private pilot’s license. Since there are few aviation opportunities in India, Kuldeep’s parents encouraged her to go abroad for higher education.

Encountering Jesus just before a Storm

While studying and working part time in London, Kuldeep first heard the story of Jesus from a coworker who later became her godfather. She was touched by Christ’s love and sacrifice to redeem mankind from the consequences of sin. After accepting Jesus as Savior, Kuldeep decided to get baptized. “There are many gods in India,” she said, “but Jesus is the only God who truly loves me.”

At the end of 2017, she was diagnosed with PSE, a disease that can lead to liver failure. As an active young lady who never had major health issues, she was devastated and did not dare inform her parents in India, choosing instead to navigate the situation alone. She hoped her health would stabilize if she followed her doctors’ instructions. But after a year of treatment, while studying and working part time, the doctors said her liver was 90% damaged and that she needed an immediate liver transplant. Although she put her name on the waiting list, the chances of finding a suitable donor were slim.

Following the recommendations and encouragement of doctors and friends, Kuldeep informed her parents who purchased a ticket for her return to India. Five hospitals refused to handle Kuldeep’s surgery even though her younger sister was prepared to donate part of her liver. The doctors claimed such procedures come with a mere 5% survival rate. Even though Kuldeep’s parents did not know God, they prayed and didn’t give up hope. One hospital finally accepted her for surgery.

Encountering Jesus in a Dream

On August 2, 2019, during her 18 hour surgery, Kuldeep encountered Jesus in a dream.

I was covered with thorn bushes, and saw Jesus come close. He said, “Come out, girl!” I responded, “I can’t. I am stuck and bleeding badly!” Jesus replied, “Girl, do not worry about anything, just come near Me and you will be fine.” He held my hand and helped me out of the bushes. Once I was out, Jesus wrapped His arms around me, and I started to cry. I still remember Him whispering in my ear, “Be strong and courageous. You will overcome.” I opened my eyes with tears rolling down my face, and found myself in the intensive care unit with tubes all over me.

Kuldeep and her younger sister.

Even though the surgery was successful, the doctors were surprised to see Kuldeep come back to her senses. After 20 days, she could talk and the first thing she said was to tell her parents about Jesus in her dream. They were amazed and grateful. On that day, they visited a nearby church and said a prayer of thanksgiving.

The encounter with Jesus in the dream not only changed her family’s view of God, it gave Kuldeep tremendous courage and hope despite her weak body. After a few months, she got her strength back and was eager to complete her last semester in Canada.

Encountering Jesus in the Hurdles

Kuldeep returned to Canada earlier this year. Due to her liver condition, she frequently needs antibiotic treatments. Something she didn’t expect is that her health expenses were no longer covered. Since her surgery was in India, the insurance company identified hers as a pre-existing case even though the liver disease was first diagnosed in Canada. Left with few options, Kuldeep set up a long term payment plan for her health expenses. She anticipates paying it after she graduates and gets a job.

Kuldeep said that despite the many hurdles in her life, Jesus promised she will overcome. “I will put my trust in Him, He who understands my pain. I know I am not alone, and I don’t need to worry, because over the past three years, despite the difficulties, I continually experienced His provision and support through those He put on my path.” 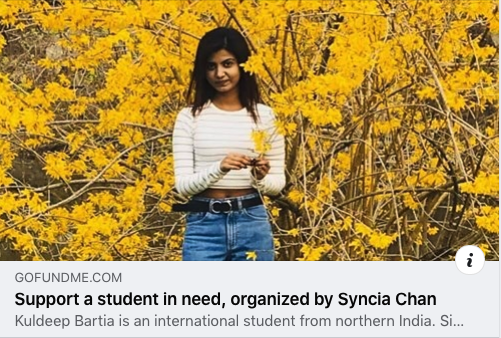 If you want to help Kuldeep pay her health expenses, visit this GoFundMe page.